The N25 New Ross Bypass PPP Scheme includes the design, build, finance, operation and maintenance of sections of both the N25 and N30 routes, comprising approximately 14.3.km of dual carriageway (N25 & N30 routes). The Scheme also includes the design, build and finance (but not the operation and maintenance) of 1.2km of single carriageway in the N30 route East of Corcoran’s Cross´ roundabout.

The N25 New Ross Bypass PPP Scheme commences at Glenmore in County Kilkenny and crosses over the river Barrow via an extrados bridge (the Rose Fitzgerald Kennedy bridge) at Pink Point in County Kilkenny and Stokestown in County Wexford. It then continues in an easterly direction where the bypass intersects with the R733 in Landscape and continues in a north easterly direction to connect to the N25 at Ballymacar Bridge. From there the bypass route continues to the northeast finishing at the N30, at a point to the east of Corcoran’s Cross.

The principal features of the N25 New Ross Bypass scheme are: 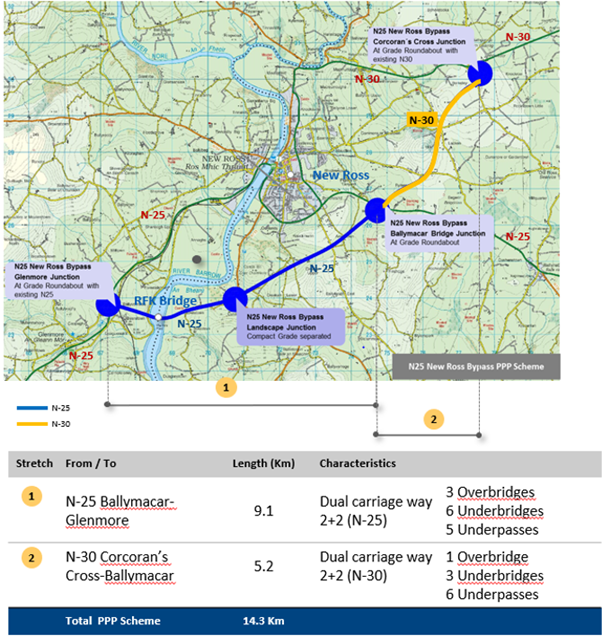